Skin Conditions are Expensive and 2020 Needs All the Discounts It Can Get!

I’ve decided to do something new for 2020. Since most of us are doing a chunk of our holiday shopping from home this year, I’ve collected the best rosacea skin care Black Friday sales and deals that I can find to share them with you.

All I’m Promising is a Chance to Save Money

Though these are all rosacea skin care products that I’ve tried and like, as I’ve said a bajillion times before, I can’t guarantee they’ll be right for your skin. We all have our own unique combinations of signs, symptoms, triggers and stuff that works. That said, in case you’ve found that some of the same products work for you as work for me – or if you were hoping to save money as you try them for the first time – here are some of the best ones I’ve tested over the years, and the discounts they’re offering today.

To be clear, I’m not selling any of this stuff. All the links I’m providing are to the stores where I shop for these rosacea skin care products. These are not my stores, but they are holding great Black Friday sales!

Use Coupon Code BF at checkout to apply your discount.

I can’t say enough good things about this skin care company and its products. I’ve been using the same Noble Naturals rosacea skin care products for almost a full year, and they’ve given me the same beautiful performance through the winter, spring, summer, fall, and now returning to winter again. Extremely gentle and hydrating products. I raved about them in a recent review on my rosacea blog.

The Best Rosacea Skin Care Products for My Face

Other Favorites from Noble Naturals

The Deal: 20% off your whole order of anything on the site

I originally fell in love with Bedrock as a brand when I tried the Bedrock Balm, which worked wonders on helping to heal a nasty flare-up (which I documented on my Rosy JulieBC blog).

I’ve started using it on mosquito bites, scrapes, and even the occasional regular pimple that decides to make a rare appearance.

Since then, I’ve had the chance to try other products from the same brand and they’re all just as great. They’re simple, gentle, and lovely. This is a great chance to try them out or stock up!

Other Favourites from Bedrock

There have been a lot of companies rushing into this industry, some of whom have been more trustworthy than others. Every RubyLux product I’ve tried so far has been consistently good quality, and I’ve always had my questions answered quickly and respectfully on the few occasions I’ve contacted them.

Other Favourites from RubyLux Lights

These are the best rosacea skin care Black Friday deals I could find so far. If I spot some more throughout the day, I’ll be sure to add them! Take care and stay safe, Rosy Friends.

Trying to achieve the right rosacea skin care strategy to stop flare-ups is hard enough, as it is, without the added heat and humidity from the summer months to make the entire process more complicated.

When the mercury starts to rise, don’t let the color in your cheeks rise with it! Instead, use the right strategy to help you to enjoy the summer while keeping the redness, bumps, itchiness, heat, and other rosacea symptoms and discomforts at bay.

Check out the following rosacea skin care tips to keep cool, even when the weather is hot:

Summertime can be a ton of fun, as long as you use the right rosacea skin care tips to keep the redness down. Then you can think about what truly matters: having a great time!

When you continually have a red face that looks as though you have a sunburn that won’t go away, you will likely start to wonder what’s going on with your complexion. This becomes more confusing when those rosy cheeks are accompanied by additional symptoms such as itching, burning, extreme dryness, or little pimples that resemble whiteheads.

Diagnosis of rosacea is becoming increasingly common, but as there is no specific test for this condition, doctors tend to rely on a physical exam of the skin, in combination with a history of your symptoms in order to reach a conclusion with regards to what is afflicting you.

For this reason, misdiagnosis of rosacea is common. It is often assumed to be a form of acne, eczema, psoriasis, or even lupus, as all of those conditions can present with similar types of symptoms. Therefore, if you have been showing symptoms of a red face that just don’t seem to be going away, it’s important that you do speak with your doctor and not simply assume that it is rosacea.

At the same time, this same issue works the other way. Many people with rosacea have been treating their skin for another condition following a misdiagnosis. This can cause symptoms to worsen, or it can allow the condition to progress because it is being improperly controlled.

Please note that this is not medical advice.  It is not meant as a recommendation.  It’s meant to help share information I’ve discovered over the years and that I thought you might find interesting and helpful.  Always talk to your doctor before making major dietary or health changes.

Make an appointment with a doctor

If you think that you may have rosacea because of symptoms of a red face, rosy cheeks, burning, little pimples, or any of the other symptoms of rosacea it is important to speak with a doctor. The diagnosis may be made by your regular physician, or you may need to see a dermatologist.

To prepare for your appointment, you may find that a diary of rosacea symptoms will be a helpful tool. If you record the symptoms that you experience over the days that precede the appointment, you’ll be able to show your doctor the times of day when you experience the most symptoms, the types of things you ate when symptoms occurred, the amount of sunlight to which you were exposed, exercise and physical exertion, and even the amount of stress that you were feeling. This can help to point to certain triggers, which is very helpful for both yourself and the doctor in making a diagnosis and in suggesting rosacea treatments that will work.

There aren’t any screening tools such as blood tests for rosacea, so the most important thing that you can do when you prepare for your first visit to the doctor’s office is to go with a clean and moisturized face. Don’t wear makeup. Observing your skin is one of the primary techniques that a doctor can use to help to decide whether or not your red face is caused by rosacea. If you cover it or change it with makeup, that could mislead your doctor.

At the dermatologist appointment

Your doctor or dermatologist will likely speak with you about your medical history. This may include questions about medical conditions, your skin care routine, mental health issues (as stress and anxiety can be some primary rosacea triggers), lifestyle (such as time spent outdoors in direct sunlight), whether or not your family has a history of rosy cheeks, and even about your menstrual cycle (if you are female, of course).

Some components of a physical exam may also be conducted in order to rule out other potential causes of the symptoms. This will mostly involve a careful skin examination during which the symptoms are carefully observed. At this time, you will likely be asked about other symptoms such as any pain, itching, burning, or stinging that you feel in the red parts of your face.

Receiving a rosacea diagnosis for your rosy cheeks and other symptoms

The actual diagnosis of rosacea should be relatively fast, easy, and painless. This will be even faster if you have taken note of your symptoms and potential triggers, in advance. The reason is that it will help your doctor to more quickly rule out other potential conditions that could be causing the symptoms.

An accurate rosacea diagnosis is key to being able to treat and overcome your red face symptoms and to reduce or eliminate the discomforts associated with this condition, such as burning and stinging. Beginning treatment early on is also important to helping to slow the progression of the condition. While not every rosacea sufferer’s symptoms will worsen over time, many people who have this skin disorder do find that it becomes more severe as the years pass.

Since there are many different components to a rosacea treatment, and it takes some trial and error to discover what will work for each specific individual, an early start is your best advantage. Some of the things that you should expect to have recommended to you include:

Light therapy is a relatively new type of treatment for red face symptoms, but positive responses over the last decade to treatments involving red light or red combined with other colors of light, have made this a much more common practice. If your doctor or dermatologist does not bring up the topic among the initial forms of treatment for rosacea, don’t hesitate to bring up the subject in order to discuss whether or not it will be appropriate for you and your new skin care routine. 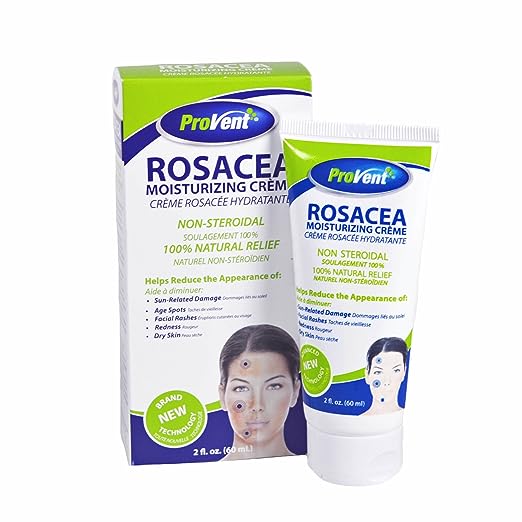 Green/Natural ingredients: Yes and No

Did I buy it more than once?: No

How long did 1 purchase last?: Just over 2 months.

Where to Get ProVent Rosacea Moisturizing Creme

A topical formula in the form of a cream that is rapidly absorbed by the skin. It is meant to provide nourishment to the skin to reduce the look of redness, facial rashes, dry skin, damage from the sun and age spots.  It’s non-greasy, does not contain artificial fragrances or artificial dyes.

My Review of this Rosacea Treatment Product

Did I buy it more than once?: Yes.

How long did 1 purchase last?: The travel size has lasted me for 2 months so far with weekly use and it is still half full.  I predict the full-size will last for the better part of a year.

Where to Get Celtic Complexion Creme Exfoliant

The official website claims that this product will provide a rich cream product containing micro-sized jojoba beads (no plastic micro beads) for gentle and effective exfoliation that won’t strip the natural moisture barrier away and will not harm “even the most delicate skin.” It is meant to provide a soothing, hydrating, nourishing exfoliation along with an antioxidant boost.

My Review of this Rosacea Skin Care Product

Did I buy it more than once?: Not yet, but I will.

Where to Get Celtic Complexion Calming Serum

A soothing serum made from high quality, potent, all-natural, vegan, gluten-free and paraben-free ingredients.  These essential oils and essential fatty acids calm the skin and that reduces inflammation, redness and sensitivity associated with rosacea as well as sunburned skin and broken capillaries.

My Review of this Rosacea Skin Care Product

Search for a product review or article:

* Speak with a Doctor/Dermatologist

This site does not provide diagnosis and none of its statements should be considered as medical advice. Reviews are based on my personal experience. These are not recommendations for treating or curing any condition, disease, illness or anything else. This site is meant to be informative and to provide a representation of my experience with a wide range of products. If you're thinking of trying something new, talk to a health care provider to know for sure if it's right for you. ♥